Before heading back to America for the summer, we knew we needed a few days to ourselves to go somewhere and process the long, crazy year we had just finished.  We had a really hard time deciding where to go; we didn’t really know what type of vacation would be what we needed.  We definitely weren’t in the mood for city hopping, but we weren’t so sure about the beach either.  We wanted to go somewhere beautiful and relaxing, but we didn’t want anything too boring.  We ended up settling on Bosnia and Herzegovina because we were both curious about its history, which somehow, sadly, seems to have been erased by people outside of the region. 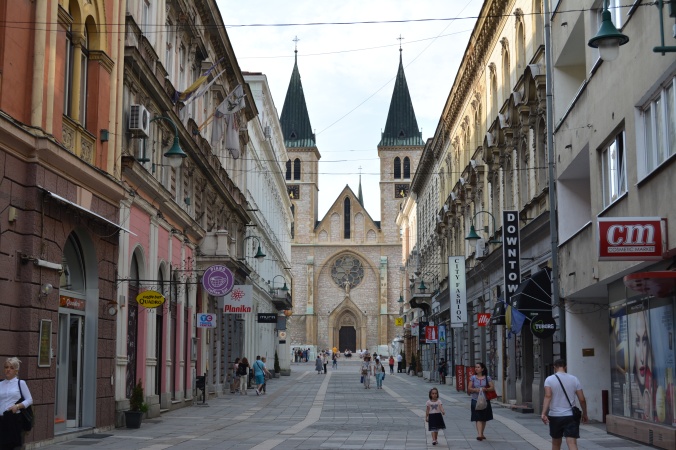 We spent one very brief night in Sarajevo, where we walked around the old town, Baščaršija.  I could immediately see the traces of Ottoman influence as the familiar sight of cezves and nazar met my eyes.  The most interesting thing for me in Sarajevo was visiting the Latin Bridge -where Archduke Franz Ferdinand was assassinated -and realizing the World War I started exactly 1oo years before the day my husband and I got married.

The next morning, we took a bus to the beautiful little city of Mostar, famous for its unique bridge that, before being destroyed by Croats in 1993, had been a symbol of the city for over 500 years.  The bridge was rebuilt in 2004.  It’s a lot bigger than it looks and so slippery!  The view from both above and below is incredible.

After walking around the city a bit, we checked into our hostel, Hostel Miran, which was by far the best thing about our trip to Mostar.  The staff and owners were all so friendly and interesting and the spirit of the place was very communal.   It was so much fun to listen to stories from people all over the world, have a few drinks, and watch some football in the garden at night (by which I mean soccer for American readers).  If you are thinking about going to Bosnia and Herzegovina, Mostar is a must, and if you are thinking of going to Mostar, this is absolutely 100% where you should stay.  It is wonderful!

Even the tiny bridges seem giant.

We went out for dinner a bit later, which, unbeknownst to us, would be the worst decision of the trip.  We had signed up to go on Miran’s tour through Herzegovina, which included eight hours of touring all the main attractions of the Herzegovina region with Miran as our guide, who knows the whole place like the back of his hand.  Unfortunately, my husband was not feeling so hot the morning of, but decided to go anyway, despite my efforts to convince him to wait another day.

Off we went, but it wasn’t too long into the trip that my husband realized that he had been foiled by some bad soup from the night before.  I was simultaneously feeling sorry for him and feeling glad that I hadn’t been hungry and had only ordered a glass of wine at that place (dinner of champions).  We had just reached the beautiful stream at Blagaj when my husband started vomiting ferociously into a tree.  After talking to a few of our group members, it turned out that two others in our tour group had also experienced food poisoning throughout Bosnia and Herzegovina on their trip, so it’s worth mentioning to be cautious about what you order!!  After that first night, I pretty much stuck to buying snacks at the grocery store and an occasional ice cream cone.  As much as I enjoyed our trip, I wouldn’t exactly call Bosnia and Herzegovina a foodie heaven, so there’s no need to feel bad for playing it safe! 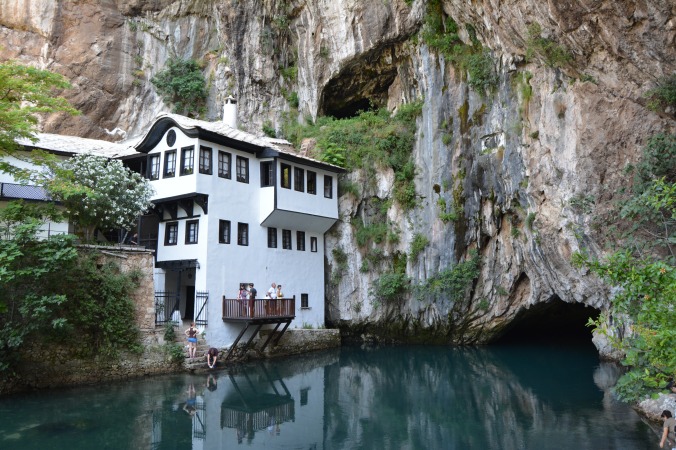 Luckily, he felt a little better after that and Miran and the others in our group were super kind and helpful.  We got him a spot in the shade, a coke, and some cold, fresh, delicious water from the spring.  Not even food poisoning could take away from the stunning beauty of this place.  The contrast of the old Dervish temple and the emerald-blue stream was spectacular. 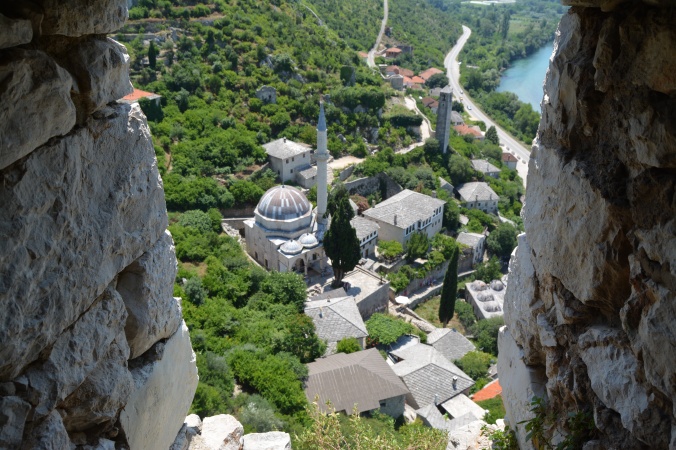 View from the top

Our second stop was a brief hike up to an old fortress at Počitelj, a former Ottoman village.  Upon arrival, they fed us fresh apricots and figs – both of which were delicious!- before heading up to check out the views of the city from below.  My husband napped in the van while the rest of us trudged up the steep, narrow stairs to the top of the tower.  It made me wonder what it was like to actually live in such a place and have to climb those stairs every day!  At least the views were amazing.

The next stop on our tour was undoubtedly my favorite:  Kravice Falls!!  I felt like I’d stepped through a portal right into a fantasy novel.  It was a super hot day, so it felt fantastic to jump into the icy water and enjoy the views from the water.  Miran led us around the falls and showed us how to safely navigate around the streams of water.  We also got to do some cliff jumping, which was super fun! 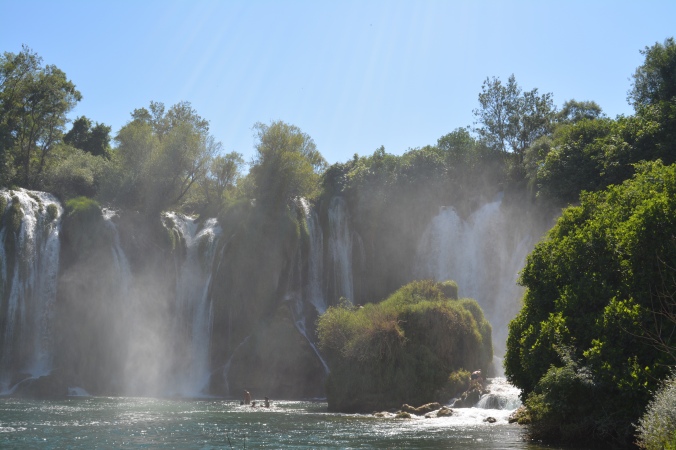 Being at the falls really made me wonder how such an ugly war could have happened in such a beautiful, beautiful place.

Our final stop on the tour was the most revealing for me, when our host stopped us at a  monument of a large cross overlooking the city.  This is where things got very real.  The cross, it turns out, was built to honor the Croats who died during the war – a very controversial move, as it was the Croats and Serbs who were responsible for the deaths of thousands of Bosnians during the war.  Our tour guide took this time to tell us about his experiences during the war, when he was a teenager.  The Croatian and Serbian armies took over most of the city of Mostar.  In the beginning, most of the Bosnians were either killed or tried to escape.  Those who remained had to go to the East side of the city, the only part of the city still controlled by Bosnians.  Nobody in Europe or North America wanted much to do with the war.  Thousands of people were being slaughtered, wounded, starved and raped in the heart of Europe and nobody came to help.  He told us how the bombs and the shootings eventually took the lives of almost all of his family members.  He told us about how he and his friends would sneak out at night to forage for food; teenage boys who didn’t even weigh 100 pounds because they had nothing to eat.  All of this in 1993.

He showed us all of the places on the hill where snipers had made their camps.  There are still bullets, land mines, and pieces of shrapnel littering the landscape.  The Americans and Europeans did eventually get involved in the war, but not really to help; merely to serve their own interests.  Many of the Westerns who did come to “help” only took advantage of the already oppressed victims, often raping them, threatening them, or convincing them to give sexual favors in exchange for minor amounts of food.  There is a very sober feeling in the air in Bosnia and Herzegovina once you look beyond the tourist curtain.  Most of the people don’t trust anyone, and I don’t blame them.  They know all too well how a government doesn’t usually represent its people.  We came back in from the tour, not only exhausted physically, but emotionally.

The evidence of what happened between 1993 and 1995 is still standing all over the city.  The people don’t want anyone to forget what happened.  They are still scared…after all, it was not all that long ago.  Despite the fact that it is now a peaceful place and tourism is on the rise, the people are still suffering.  Evidence of the trauma is everywhere.  There is still a 47% unemployment rate, one of the highest in the world.  It seems so ironic that such a beautiful country with such kind and welcoming people could experience so much pain, especially so recently. 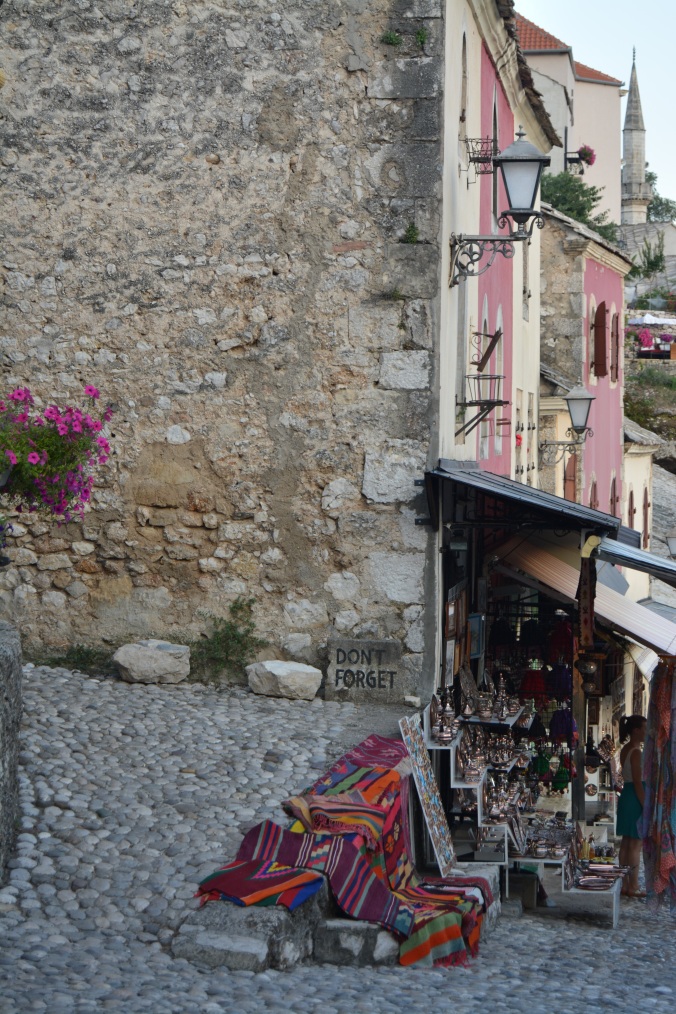 It is so important to shed light on modern genocide.  So often, it goes unnoticed.  People tend to view it as a historical problem that died with the end of WWII when it happens every single day, even still.

3 thoughts on “Bosnia and Herzegovina: A War-Torn Paradise”